The Human Dimension is a Parliamentary Priority
Friday, September 21, 2018

Each September, the OSCE focuses considerable attention on its body of commitments in the human dimension, ranging from human rights and fundamental freedoms, to democratic norms and the rule of law, to tolerance in society and other humanitarian concerns. For two weeks, the participating States and interested non-governmental organizations gather in Warsaw, Poland, to review implementation of OSCE commitments in each of these areas.

This Human Dimension Implementation Meeting (HDIM) is organized under the auspices of the OSCE’s Office for Democratic Institutions and Human Rights (ODIHR). Other OSCE institutions, like the High Commissioner for National Minorities and the Representative on the Freedom of the Media, also participate in the exchange of views. Traditionally, the OSCE’s Parliamentary Assembly (OSCE PA) is also represented at the meeting, and its presence this year was particularly strong.

About the OSCE PA

The OSCE PA is one of the original institutions of the OSCE and consists of 323 parliamentarians who gather three times a year, including at an annual session each summer where resolutions are adopted. Today’s high-profile OSCE work on human trafficking, anti-Semitism, and media freedom began years ago with initiatives undertaken by the assembly and transferred at the urging of parliamentarians to national governments for concrete follow-up activity.

Decision-making in the OSCE PA is usually based on a majority vote, which contrasts with the consensus needed among government representatives in OSCE diplomacy. This allows the Assembly to address issues, particularly in the human dimension, in a way that reflects the overwhelming opinion of the participating States but would be unlikely to succeed in other OSCE bodies, where representatives of offending countries can block action.

For example, in the past five annual sessions the OSCE PA has adopted resolutions condemning Russia’s clear, gross, and uncorrected violations of Helsinki principles in it aggression against Ukraine, including violations in the human dimension.  At the 2018 annual session in Berlin last July, Russian parliamentarians unsuccessfully opposed consideration and adoption of a text on human rights violations in Russian-occupied Crimea, and on the human rights situation in Russia itself.

The OSCE PA also criticizes other countries’ record in the human dimension records—including actions of the United States—but the assembly’s criticism is generally commensurate with the severity of perceived violations.

The OSCE PA defends ODIHR in its work facilitating implementation of commitments where needed, and civil society in its advocacy of human rights. At the 2018 annual session, parliamentarians condemned the ongoing efforts of Turkey and some other countries to restrict non-governmental voices at the HDIM and other human dimension events, or to dilute them with non-governmental organizations formed at the behest of some of the more repressive regimes in the OSCE region.

In Berlin, the OSCE PA called “on all OSCE participating States to welcome NGO participation in OSCE events, and to reject all efforts to restrict participation in OSCE human dimension events so long as these groups do not resort to or condone violence or terrorism, to ensure the broadest possible contribution from NGOs to the OSCE’s work and a full and unrestricted exchange of information and opinions.”

In 2018, five OSCE PA officers—all elected members of national parliaments—spoke at the HDIM.

OSCE PA President George Tsereteli of Georgia addressed the gathering’s opening session, observing that while the human dimension is also known as the “third dimension” of the OSCE’s comprehensive approach to security, it “should always be our first priority.”

“When we put our OSCE hats on, our primary goal is to better the lives of the more than one billion people in the OSCE area,” said President Tsereteli. “Our duty is to respond to their desire to live in a free society, where democratic debate is encouraged and not stifled, where journalists are respected and not jailed or killed, where a simple citizen can trust that his or her voice counts and is not discarded.”

Two of the OSCE’s nine Vice Presidents—Isabel Santos of Portugal and Kari Henriksen of Norway—also attended. Santos focused on the human rights of migrants, and Henriksen on promoting opportunities for women and children that will protect them from human trafficking.

Two of the three officers of the OSCE PA’s General Committee on Democracy, Human Rights, and Humanitarian Questions were also in Warsaw. Committee chair Margareta Kiener Nellen of Switzerland addressed hate crimes and hate speech, including ways to combat them, while committee rapporteur Kyriakos Hadjiyianni of Cyprus focused on challenges to freedom of the media, ranging from rhetorical attacks to violence and incarceration of journalists. 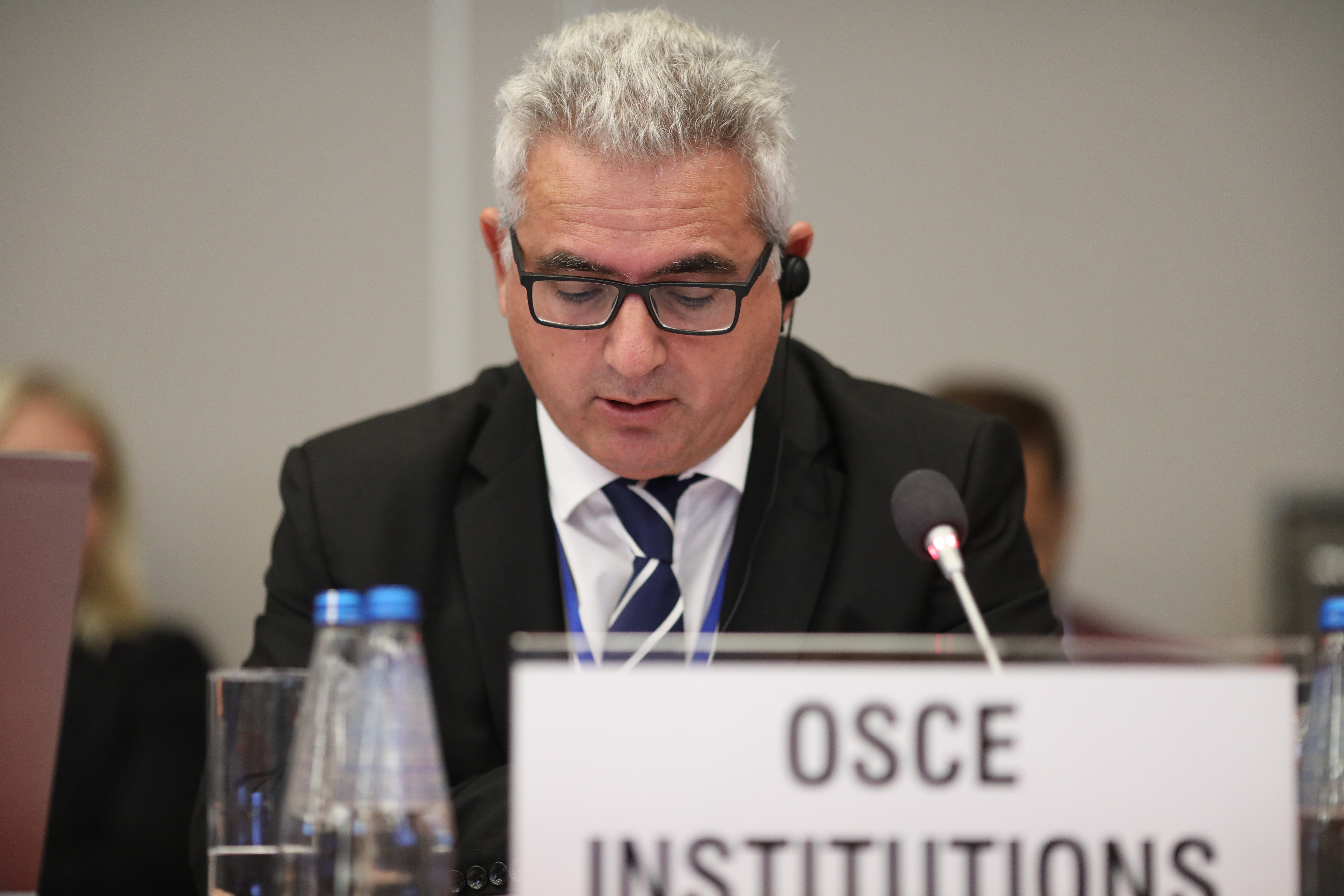 OSCE PA human rights committee rapporteur Kyriakos Hadjiyianni delivers remarks at the freedom of the media session at the 2018 HDIM in Warsaw.

Throughout the year, the OSCE PA deploys short-term election observation missions and represents the OSCE as a whole in reporting the preliminary conclusions immediately after elections take place. The assembly also has an active Ad Hoc Committee on Migration, chaired by Belgian parliamentarian Nahima Lanjri, which encourages humane treatment of refugees and migrants alike, including respect for their rights, in accordance with international norms.